For discussions which are not directly related to MythTV.

I run a headless mythtv server on Linux, when recordings finish a couple of scripts run. 1) ascript that cuts out commercials, 2) MythicalLibrarian which renames the file in accordance with plex conventions. I can then watch any recording from any device in the world via plex.

Issue: sometimes the season number and episode number is not found by the MythicalLibrarian script. I have worked with admins in the past to fix the database they use namely, IMDB and theTVDB so matching is more accurate. However, should I choose to edit the file names myself so that plex with then pick it, and fix my library, I cannot from windows. I can do this no problem from my Linux server, but I cannot from my windows machines as I get the error that I need permission form unix/mythtv user.

how can I map windows user account SID to Linux UID/GID or make mythtv user on linux open enough to edit files from a guest account (ie my windows user). I still use the mythtv web interface to delete recordings but if I wanted to change the name its much more complicated doing it from command line via putty, especially since the names are long.

basically I'm looking for simple solution to rename recordings on a Linux server from my windows directory gui. 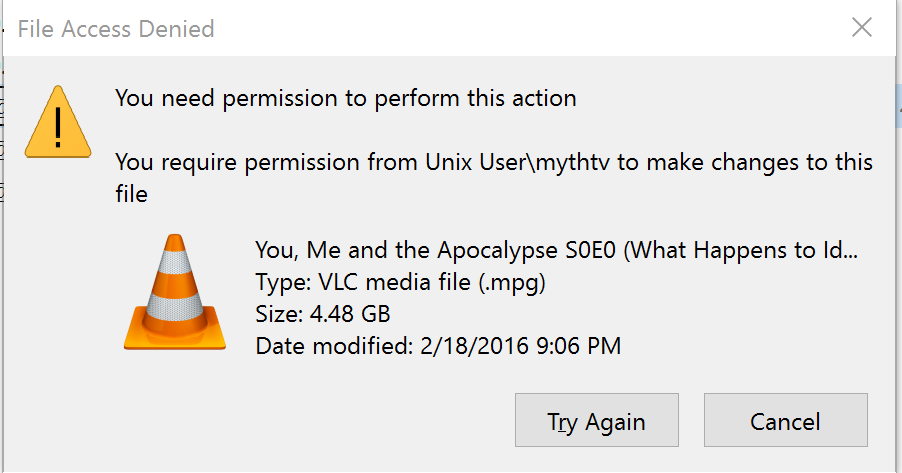 Another simple solution would be to use Filezilla (or your favorite FTP client) with a SFTP connection to the Linux server via SSH server.
Top
Post Reply
3 posts • Page 1 of 1